Breathing is typically automatic and controlled by the respiratory

center at the base of the brain. Breathing occurs during sleep and even during unconsciousness. An average adult inhales and exhales an average of 15 times a minute while in rest.

Breathing is initiated by the expansion of the ribs and the chest while the diaphragm tightens and flattens, resulting to filling the lungs with air. Air enters through the nostrils or mouth passing through the nostrils making the air moist and warm, trapping any particles trying to enter the respiratory system or through the mucus membranes lining the mouth, respectively. The air will then pass down the throat into the trachea or windpipe, bronchi, bronchioles and lastly, alveoli, where gas exchange occurs. Needless to say, disruption in the pathway may lead to respiratory problems. One such case is bronchitis. Having an overall understanding of respiratory diseases such as bronchitis can help when taking first aid training.

Bronchitis is when the mucus membranes of the bronchial passages become inflamed. Due to the irritation, the membranes swells and grows thicker in diameter, or may even close the tiny airways in the lungs, causing coughing spells, usually supplemented with sputum and breathlessness. There are two types of bronchitis: acute and chronic. The former lasts from one to three weeks while the latter may last for three months or more per year for two years.

Symptoms of acute bronchitis include chest discomfort, cough producing mucus (clear or yellow green in color), sore throat, low-grade fever, fatigue, wheezing and shortness of breath, usually worsening with physical activity. Sometimes, the coughs last even after the patient has been cleared of acute bronchitis. Moreover,coughing occurs as a reflex to clear the throat from secretions from the lungs.

Most cases of acute bronchitis will clear by itself without having to seek medical attention. The victim should drink lots of fluid, specifically non-caffeinated, and get plenty of rest. Drinking fluids will keep the patient hydrated and allow the lung secretions to easier thin and clear out. Drinking orange juice is highly recommended as it eases symptoms of bronchitis. Other home remedies for bronchitis include ginger, onions, almonds and asparagus, which are said to help alleviate symptoms, as well. However, it is better to ask the doctor before taking in any medications or home treatments.  If the acute bronchitis is caused by a virus, antibiotics should not be taken.

Chronic bronchitis, a type of chronic obstructive pulmonary disease (COPD), requires medical attention. This more severe type of bronchitis usually progresses from recurring injury to the airways caused by inhaled irritants. The most common cause for chronic bronchitis is cigarette smoking followed by exposure to air pollutants such as sulfur dioxide or nitrogen dioxide. 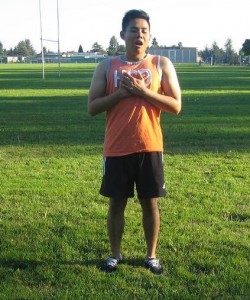 Some symptoms of this disease include shortness of breath and wheezing. The cough usually worsens after awakening and producesgreen or yellow sputum, sometimes streaked with specks of blood. Although there is no cure for severe bronchitis, several medications can be taken to help relieve symptoms.

Bronchitis may be contagious if it is caused by a virus or bacteria. However, if it is caused by smoking or other inhaled irritants, it is not. It is better to seek medical help if the cough lasts for more than three weeks, accompanied by a fever, produces discolored sputum, prevents patient from sleeping and is complemented by shortness of breath or wheezing.