Meningitis is an inflammation of the meninges, or the protective membranes surrounding and covering your brain and spinal cord. The inflammation is caused by an infection due to bacteria, virus and rarely fungi. Meningitis can also be developed due to physical injury, cancer or drugs. It can be life-threatening since it is near to the brain and spinal cord. In the health care setting, it is classified as a medical emergency.

Meningitis is usually caused by an infection due to bacteria, viruses, fungi or protozoa while some types of meningitis are not caused by these microorganisms. The bacteria and viruses that cause meningitis may be from the routine illness you may have in the skin, urinary tract, gastrointestinal system or respiratory tract that spread through the blood stream and to the meninges. The spreading of bacteria may also be due to severe head injury, ear infection or nasal sinus infection.

People who are at risk of having meningitis are the following:

Microorganisms are transmitted between people through droplets of secretions from the throat or respiratory system. It cannot spread by simply breathing air where there is a person infected with meningitis. The incubation period is four days, but it can be between two to ten days. You can also get meningitis caused by Listeria by eating contaminated food.

Symptoms of meningitis may vary depending upon the cause, but the most common are the following:

Diagnosis of meningitis may be helpful to immediately treat it and reduce its complications.

Meningitis is life-threatening as it is considered as a medical emergency. It has high mortality rate if untreated. If given with delayed treatment, it is associated with poor outcome. Treatment may vary depending upon the cause and its underlying symptoms.

Problems may occur during the early stage of meningitis. It may indicate severe illness or worsening condition. And these may require specific treatment. It may have several complications. 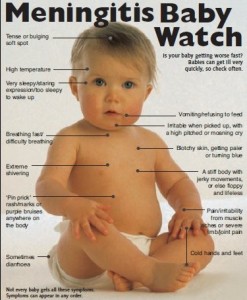 One way of preventing meningitis is through routine childhood vaccination against Hemophilus influenza type B, which is one of the causes of the disease. Routine vaccination against Streptococcis pneumonia with the pneumococcal conjugate vaccine is also given and reduces incidence of pneumococcal meningitis. Vaccines are also given for protection against measles, mumps and polio which causes meningitis. Meningococcal conjugate vaccine (MCV4) is recommended to be given to children between 11 to 12 years old and booster shot at 16.

Proper hygiene is also important to prevent infection. Washing hands regularly is encouraged especially before eating and after using the bathroom. Avoid sharing food or drink to those who are ill. Stay healthy, eat healthy diet, get enough rest and exercise regularly. If you are pregnant, avoid raw foods and soft cheese.